You are at ...
Raise is celebrating the Year of the Nurse and Midwife     | 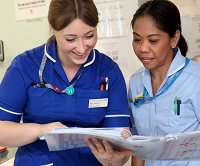 Raise is joining in the celebrations of The Year of the Nurse and Midwife, by launching a special fund that will support our nurses. The initiative is being run in partnership with the Chief Nurse at West Hertfordshire Hospitals NHS Trust Tracey Carter.

The World Health Organisation has designated 2020 as The Year of the Nurse and Midwife as a way of marking Florence Nightingale’s centenary year. Florence Nightingale (1820 – 1910) was an English social reformer and is regarded as the founder of modern nursing. She came to prominence while serving as a manager and trainer of nurses during the Crimean War, in which she organised care for wounded soldiers. Nightingale elevated perceptions of nursing and became an icon of Victorian culture, especially in the persona of “The Lady with the Lamp” making rounds of wounded soldiers at night, and later worked to professionalise nursing roles for women.

Raise will also be celebrating and highlighting our wonderful nurses and midwives throughout the year; every Friday during 2020 we will feature one of the team on our website and social media. We are inviting staff and patients alike to nominate individuals for us to include.

We have a suspicion that we may have more than 52 nominations but, whether featured or not, Raise would like to take the opportunity every week to thank every single nurse and midwife for their dedication and professionalism. The Year of the Nurse and Midwife is a fantastic initiative and wholly merited by the profession.

Some of our wonderful community fundraisers are featured here (click)

Watford FC were amazing during the worst of COVID-19; a true neighbour from heaven at a time of need