The idea of a longed-for baby dying at birth is truly devastating, but tragically around 15 babies die before, during or soon after birth every day in the UK.

Special cuddle cots can help families cope in the early hours of their grief by allowing them to spend precious time with their babies. A cuddle cot is a cooling pad which can be put under the mattress of any type of baby bed to help keep the baby cooler, slowing down the natural changes in their body after death. This allows parents to spend more time with their babies; they can even take them home for a while, helping families to bond and for special memories to be made.

Recently Katherine and Andrew Calvert kindly donated a cuddle cot to Watford General’s maternity unit. Here they explain why they wanted to give such a thoughtful gift.

Katherine said “Alfie was our first child. The whole pregnancy was perfect, every scan we had was perfect. We had a growth scan on his due date and the midwife said everything was fine.

“I went into labour at 41 weeks. I had a sharp pain, so thought it was the start of labour. I went into the Lister for a check-up on the Tuesday evening and was devastated to be told that Alfie’s heart had stopped. I could have gone home but I didn’t want to so I had him at 8:07 on the Wednesday morning, 29 July 2015.

“We spent all day with Alfie and even took him home for a few hours, which was so important to us. My little brother wanted to meet Alfie but he was young and didn’t want to come to hospital. But when we took Alfie home, he drove over. He would never have met Alfie if we hadn’t been able to take him home.”

Andrew added “We were lucky as the hospital allowed us to have our parents, friends and grandparents in. Our friends who were going to be Alfie’s godparents came over too and we had a little christening for him. The chaplain came and gave a blessing.

“I was struggling to know what to do in the months after Alfie died; I didn’t know what to do, so fundraising was my way of coping with it, and then loads of my mates got involved and helped.

“We fundraise now through football. We have our own established club, the Hartham United Football Club, and we play every Sunday. We’ve now got a second team developing and the aim is to get the little ones involved too – right down to the under 6s.

“We do this to keep Alife’s name alive. Through the club we can get local businesses involved, encouraging them to donate by sponsoring a player. We couldn’t achieve what we have without two or three key businesses who helped us at the beginning. We now have 29 players in total and 26 have got sponsored. When businesses hear what we’re fundraising for, they’re quite eager to get on board.

“We didn’t know anything about babies dying like this. It’s not something I thought happened; I simply had no idea. Until it happens to you. So with the football club we’re also helping to raise awareness and break down stigma. Because you think, once you’ve got past the 12 week scan that everything will be fine.

“It’s only once the team got up and running and other people joined, that we realised we weren’t alone. Two of the players have been through exactly the same as us. It happens more than people think.

“Our football club is there to help where we can. We do a charity match every year for Alfie’s memorial cup and we like to raise funds for different hospitals; if they need something we can help. Because we know how important equipment like this cuddle cot is. To raise money in Alfie’s name is amazing for us.”

Samantha Behagg, the bereavement midwife who accepted Katherine and Andrew’s kind donation (pictured), said: “We are so grateful for this immensely thoughtful and personal gift. It is devastating when a baby dies but we hope this cuddle cot will help provide some comfort to families in their grief. We would like to say thank you so much to Kat and Andrew and all who play for and support Hartham United for their wonderful fundraising efforts.” 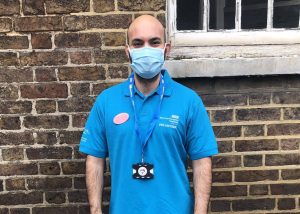